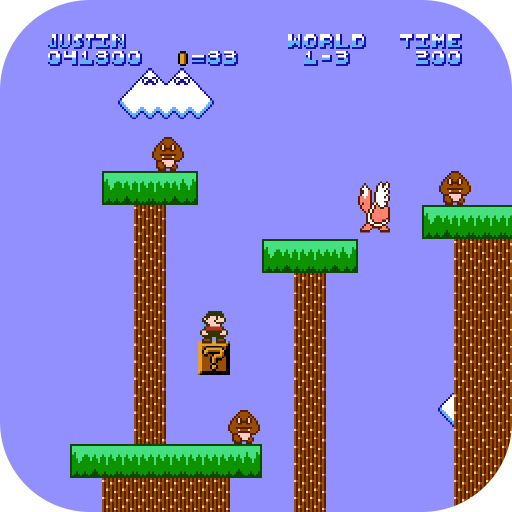 The objective is to race through the Kingdom, survive the Dragon Boss’ forces, and save the Princess.
The game is a side-scrolling platformer; the player moves from the left side of the screen to the right side in order to reach the flag pole at the end of each level.
The game world features coins scattered around for Justin to collect and special bricks marked with a question mark, which when hit from below by Justin may reveal more coins or a special item. Other "secret", often invisible, bricks may contain more coins or rare items. If the player gains a mushroom, Justin grows to double his size and gains the ability to break bricks above him. If Justin gets hit in this mode, then instead of dying he turns back to regular Justin.
Players start with five lives and may gain additional lives by picking up green 1-Up mushroom hidden in bricks, or by collecting 100 coins, defeating several enemies in a row with a shell, or bouncing on enemies successively without touching the ground. Justin loses a life if he takes damage while small, falls in a bottomless pit, or runs out of time. The game ends when the player runs out of lives, although a button input can be used on the game over screen to continue from the first level of the world in which the player died.
Justin’s primary attack is jumping on top of enemies, though many enemies have differing responses to this. Some enemies will flatten and be defeated, while others will temporarily retract into its shell, allowing Justin to use it as a projectile. These shells may be deflected off a wall to destroy other enemies, though they can also bounce back against Justin, which will hurt or kill him. Other enemies, such as underwater foes and enemies with spiked tops, cannot be jumped on and damage the player instead. Justin can also defeat enemies above him by jumping to hit the brick that the enemy is standing on. Justin may also acquire the Fire Flower from certain question mark blocks that when picked up changes the color of Justin outfit and allows him to throw fireballs. A less common item is the Star, which often appears when Justin hits certain concealed or otherwise invisible blocks. This item makes Justin temporarily invincible to most hazards and capable of defeating enemies on contact.
The game consists of eight worlds with four sub-levels called "stages" in each world. The final stage of each world takes place in a castle where Dragon Boss is fought above a suspension bridge; the first seven of these Dragon Bosses are "false Bosses" whom are actually minions disguised as him, whilst the real Dragon Boss is found in the 8th world. Dragon Boss and his decoys are defeated by jumping over them and reaching the axe on the end of the bridge, although they can also be defeated using a Fire Flower. The game also includes some stages taking place underwater, which contain different enemies. In addition, there are bonuses and secret areas in the game. Most secret areas contain more coins for Justin to collect, but some contain "warp pipes" that allow Justin to advance directly to later worlds in the game without completing the intervening stages.

[Control]
START: Confirms choice between One Player or Two Players, and it will also pause/unpause the game.
SELECT: Only used to select between One Player or Two Players.
D-Pad: LEFT and RIGHT will move Justin in the corresponding directions. DOWN will cause Justin to duck if he turns big.
A: This Button will allow Justin to leap onto enemies, go over gaps, and to make your way past Boss. Learning to control Justin exactly as he jumps will make your quest a success. This is also how Justin takes a stroke underwater.
B: By holding this down, Justin will run. If Justin has Fire Flower Power, Justin will throw fireballs with every pressing of the B Button (max of two on the screen at a time).